Indoor Relay and Thw Weigh In

After the snow fall last week it pushed a lot of things back, but not the weight loss challenge. Still it went off without a hitch. This challenge has them riding 2 miles on a spin bike and then doing a half mile run. Now the winners would be the ones who could do the course in the fastest time. There were two winners in the bike race, one individual and the second team and in the shuttle run only the team would win (with each team member running a half mile).

Now at first this may have seem boring, especially after last week’s totally pumped up Jodi’s Challenge, but in the end all felt as though they accomplished something they had never done before. Here are you winners; 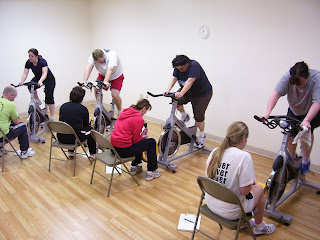 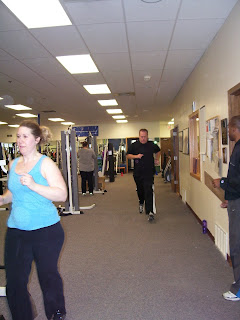 There is a change in the leader board this week. Some names have moved up and some have moved down. Some are now in the black while some have just not moved much. Here are the results for the top ten people.

Now everyone, all 22 people are now in the red and have lost some weight. As I told them and will continue to tell them, after the first month this becomes real hard. The first month is always the easiest. Now life gets in the way and you need figure out what you need to do to continue on that life style changing road. Now this is where the rubber meets the road. Stay focused!
Posted by Kevin Ellis at 4:19 AM