I have thought about this for a long time and I think I may just have an explanation. Many of my female members have asked me a question that I want to address and that is what happens to men as they get older? At one point when they are in High School and even into College they are active and in some cases very sports oriented. While back in the day you remember your husband being fit and trim and let’s admit it ladies you were attracted to him because of that. You probably say to yourself, “What happened to that man that I once knew and loved to look at?” So you have taken it upon yourself to mention to him that he may need to go to the gym and workout… hint, hint, hint and all through this process of nagging him he rebels and in most cases ignores you. Well let me see if I can shed some light on this issue.

Besides the obvious physiological things that happen to us as we age there is something else that we have tend to over looked. As I have written in the past, what is important to a person, they will concentrate on and become successful at. I have also stated on many occasions that without a clear cut objective and goal any efforts will be futile at best and very short lived. With that said, back in the days when you were dating your husband he might have been on some sports team like track and field, football, soccer, swimming, rugby, baseball or even tennis and at that time their focus was on one thing… winning and becoming the best at their sport. They wanted to see their name in lights so they spent countless hours practicing and sweating. Sports were their motivation at that time and because of that they were fit and trim.

Now you are asking yourself, what happened? Well it is simple and not an excuse… life. Yes, most men have gone from thinking about themselves and achieving goals for themselves to becoming the provider of the family and satisfying the needs associated there. Their whole world has changed from self centered to family centered. It’s what men do, they provide for their families and because of that what use to be takes a back seat. Yes, that means at the end of the day they will gain unwanted weight and they will lose there once sculpted bodies.

Now with that said, women are very sensitive about their environment and especially their health and the health of their family. I can see where a wife would become concerned about her husband’s health especially if he was very attractive at one point. But ladies look at it this way, once you had children; those kids became the focal point of your life and existence. You put yourself on hold until they were able to pretty much fend for themselves. In some cases for women it is around the time the last child enters kindergarten and then that is if they are not involved in extracurricular activities and in that case then it could be many years before you began to take care of yourself as you once did.

Well if you are taking care of your kids and your husband is taking care of the family now do you understand why he is the way he is. His focus is on providing and not looking fit. Now this does not mean he should use that as an excuse. No quite the contrary. He should be doing something to help himself and by doing that he in turn is helping his family for eternity.

How you may ask. Well, have you heard the saying the apple never falls far from the tree. Well it’s true, very true. Who you are… your kids WILL become. If you are a sedentary, out of shape, diabetic, smoking and drinking person, guess what, so will they become. If you are a go getter with an “A” type personality so will they be. If you are an athletic person and you kept your conditioning up and they see how important it is to you, they will only know that and it will become important to them.

As an example, I had something happen to me that, now that I look back it was funny but in the moment it was actually unnerving. I was officiating an under 14 indoor soccer game and the game was really tight. Everyone just knew that team A was going to beat team B and on paper this should have been a slam dunk for them. In the past I have seen both these teams play and to say the least they knew how to work the officials so that they could get the calls their way. Well I’m sorry but in my years of officiating I have never been persuaded by any one coach and I have sent coaches packing, which I am not happy about doing especially in front of their players. Well what I have learned over the years is that how the coach is so will his players be. If the coach is a quite person only making observations now and then, so will his players be. If the coach is obnoxious and irate, well so will his players be. Now throw in the attitudes of the parents and you can imagine what their little angles are like to be around. I have seen many times when the parents were cursing at the top of their lungs and I can assure you that junior has said or will say something profound by the end of that game.

Well, while officiating this game I made a call on a kid that he did not like and decided that he would tell me his opinion on the issue. After listening to him (a 14 year old) for about three seconds I decided that he needed to have an attitude adjustment and sent him to the bench for the rest of the game. Did in mention that this was a championship game and the game had just started? Well to make a long story short at the end of the game I was approached by his mother and she had a few “nice” words to say to me. After she was done I looked at her and said the following, “I can see the apple has not fallen far from the tree” and I turned around and walked away. My point is this, who we are… our kids will be, so fitness and conditioning should always be on the top of our list even when life seems to get in the way. So to answer the question whether or not you should be worried about your husbands, the answer is a resounding “Yes”. But remember he is doing his primary job at this point, providing for his family.
Posted by Kevin Ellis at 10:45 AM No comments: 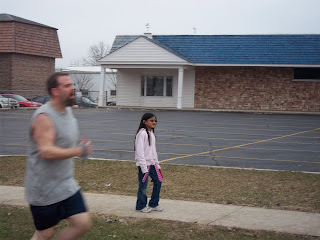 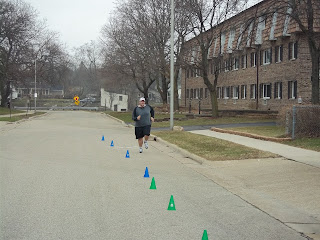 As spring approaches we find our selves getting busier and busier running around like a chicken with our heads cut off. We, by this time, have losdt our focus on what we thought was so important in the beginning of the year and we don’t even use excuses anymore on why we don’t so things to get in better shape, we just stopped doing it.

Well Saturday just to jump start the Weight Loss Challengers, their task was to run 1.5 miles. This was s flat course and the goal for them was just to finish and finish well. This challenge was done to give them all a bench mark that they can shoot at and improve upon. How many of you still use weight as your fitness goal only to lose some weight and then put that weight back on plus an extra couple of pounds for measure? Well now and for the rest of their challenges my goals is for them to begin to understand that losing weight is a byproduct of them achieving a goal, a tangable goal. Something that at the end of the day can be improved upon. Once that goal, what ever it may be, is achieved then they can shoot for a better faster, quicker, stronger goal and only then will your conditioning and fitness become fun and enjoyable. They are slowly learning that.

Because of the success that they are having outside of thinking about losing weight. Because of the gaols they are achieving by their running and weight training, their weight is dropping and this week was a clear indication of that when everyone of them lost at least 1 pound this week. One of the challengers came up to me this week and said that this has become fun for her because she now knows that she could do certain things that she thought she could never do and by trying new exciting things, her weight is dropping. You all should try it.

Now for you all that think that you are too busy to get yourselves in better condition, hog-wash. I told one of the challengers the other day that it was amazing how we make time for the things that we see are most important to us and not give anytime to the things that either we don’t care about or don’t see the reason why we should improve on them. In most cases as I see it, it is not that you don’t care about your health it is that you just think it is going to be there for you, whenever you need it. Well unfortunately sooner or later for all the abuse you have put your body thru, for all the smoking or drinking you did. For all the hard fun you had (football, Rugby, Basketball, etc), at one point you will have to pay the bill and you know just as well as I, the bill never comes due when you are ready for it, it just comes.
Begin to refocus yourself just as the Weight Loss Challenge people are doing and get back to achieving the goals you set for yourself in January trust me you will thank me in the end.
Posted by Kevin Ellis at 1:00 PM No comments: