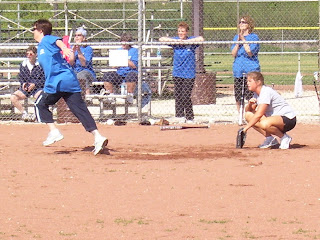 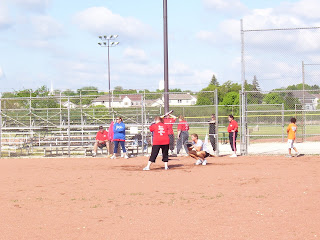 This week was softball game for the challengers. I did this because next week they will be running in their first 5k run/walk, which I am very excited about. This week the Red Team won 6 to 5. The winning run was an in-the-park home run by James Meyer(trainer) which cleared the bases. Fun was had by all.
Posted by Kevin Ellis at 9:28 AM No comments: 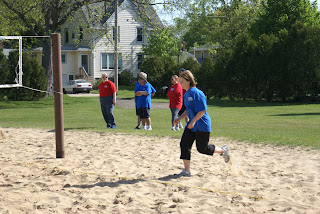 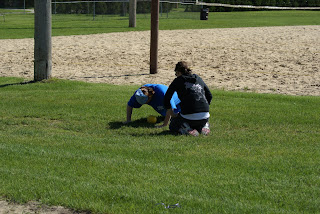 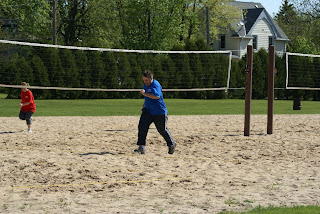 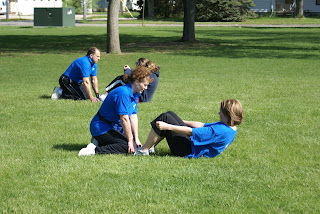 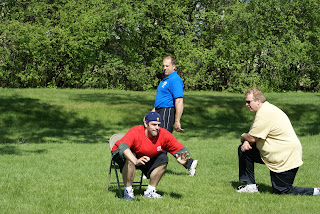 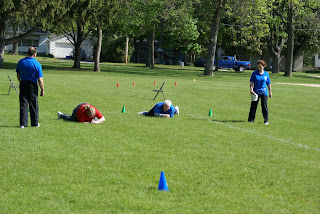 What do you get when you combine speed, strength and endurance? Kevin’s Challenge. At first when I told the challengers what they were about to do they thought that it would be a piece of cake (no pun intended) however, at the end of the challenge many of them ended up on their knees. Let me explain the challenge.
1) A 100 meter run on sanded volleyball courts
2) Then 25 push-ups
3) Then another 20 meter run thru a sanded volleyball court
4) Then 50 sit-ups, elbows to knees, not crunches
5) Then another 20 meter run thru grass
6) Then 50 seated squats, full motion
7) Then another 20 meter run thru grass
8) Then a 20 meter belly crawl, belly on the ground hips are not up
9) Then a 40 meter sprint to the end
You try doing that! Cindy tried and won the individual challenge at 4 minutes. In the team challenge it was a virtual tie. How would have guessed? Good job guys to one and all.
Posted by Kevin Ellis at 4:07 AM 1 comment:

It’s not broken, so let’s fix it

When I was in the financial markets I noticed that there were many people that started out very strong but after a few years just seemed to disappear. Why was that? I had lunch with a very successful insurance agent. He had been in business for over 20 years and he had grown his business 100 fold in that time. I asked him why it was that he was so successful and his colleagues were not or just plain struggling. His answer astounded me. He told me that he has not changed anything since he first started working in insurance. He still made his 300 dials a day. Still tried to see 4 to 5 new people a day and still came to work every day at the same time.
With that in mind I then went out to lunch with a friend who worked on Wall Street in one of the Fortune 500 brokerage houses and asked him the same question. Funny thing though, I got the same answer. I then spoke to a business man and asked him the same question and again, funny enough, he stated the same thing.
What do all of these people all have in common? No, they are not stuck in a rut but something even more astounding. They found a formula that worked and stayed with it. Now in the case of each one of these people their minimum requirements, for clients, did go up but how they got them did not change. Because of that they are where they are today.
Many of you have asked me, months ago to help you achieve certain goals in your life and what frustrates me is that as soon as we find that plan that works for you want to change it with the hopes of “making it just a little better”. Once you reach that point I know for certain that your goals will never be achieved. Why, you lose focused and once your focus is gone so goes your drive. Without drive there is no push for you to succeed.
In January many have come to me with specific goals and for three months they really worked on achieving them. Now the weather is getting nice and they are beginning to lose their focus. “Instead of running on the treadmill, I’ll just walk around the lake” or “I did gardening outside today so I don’t have to go to the gym and workout”. How many times have we heard this and then come September those same people are back in the gym with the same issue and no better off.
Yes, I know that working out every day or three times a week can get boring and sometimes you do need a break, however, let’s look at this logically. If for three months (January, February and March) the program you were on was working and you were losing weight and feeling better about yourself. Why then would you change what worked just because you got a little bored? Success comes in the everyday grind. It is in the consistency not the periodic change. You may need to increase the intensity a little but keep on keeping on and you will reach your goal and there will your success be.
Posted by Kevin Ellis at 12:56 PM No comments: 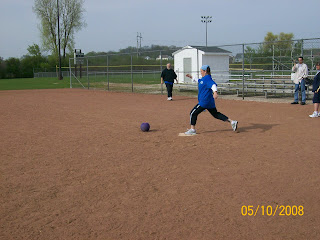 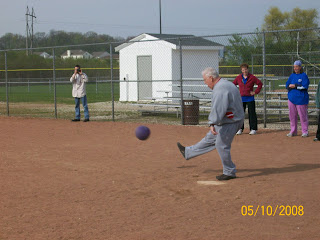 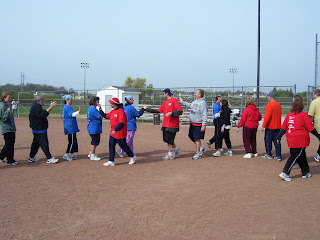 Well, this week was Kick Ball and it went very well. We had two teams and we played with softball rules. No one got hurt. No one cried. No one left the field and everyone had fun. We played six innings and in the top half of the final inning the red team finally woke up and scored 4 runs but fell short in the end. The Blue team won 5 to 4. Good job to all.
Posted by Kevin Ellis at 12:53 PM No comments: 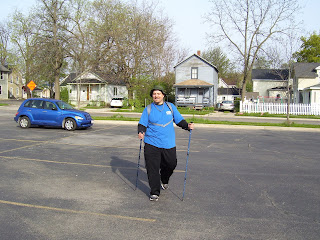 James has done something that most have only dreamed of doing he walked here from Waukesha. Now this is a total of 26 miles of up and down hills. He tried doing something like this after his divorce and did not make it the whole way this time was different though. He started from his residence in Waukesha and ended at Parkers Place in Oconomowoc. He spent that night in Naga-Waukee Park under the lights. It was a very cold night and he ended up waking up at 4am. Some of the other challengers met him at the park or at Pabst Farms in Oconomowoc for his final journey of 7 miles. The pace that was set, if he were to go for the whole way without stopping would have taken him 10 hours. His first day he walked 17 miles and the final 7 miles the next day.
When I asked James how he felt he said, “ Excellent but I have sore toes and I need a bath”. Today before he goes home he will be playing in a kick ball game and then weighing in back at Parkers Place. Good Job James! Keep up the good work.
Posted by Kevin Ellis at 6:24 AM No comments:

Well after going thru all of the meal plans, we have a winner. Now to win this part of the challenge we gave the challengers a sheet of paper and they were told that they needed to plan out five days of meals. Now each challenger was given a few things, their caloric intake per days, sodium per day and fats per day. Their goal was to come as close to their goals as possible. The numbers they were given were numbers that if the challenge were to end that day, what they would need every day to maintain their weight.
In this challenge Cindy came the closest in all of the categories. Congrats Cindy you have won a gift certificate of groceries to Sentry worth $40.00
Posted by Kevin Ellis at 1:21 PM No comments: 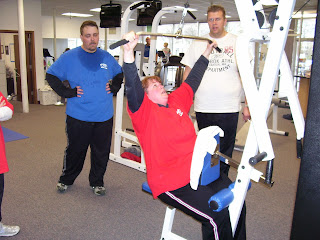 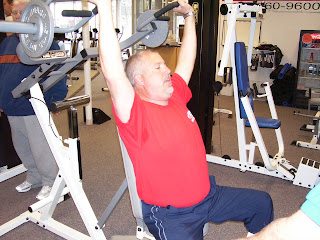 Well this week we went to another level with the challengers. One of the most important features of this weight loss challenge is the ability to understand their nutrition and the numbers they must always hit or be around to maintain their weight loss. Each person was told how many calories in a day they were to have to maintain were they are today and then with that they were to go to go Sentry (local grocery store) and go shopping and bring us back five days worth of meals that they would buy (breakfast , lunch and dinner) that would keep them at their current weight. However, the way we pick a winner in this challenge is how close they come to their Sodium and Fat content levels. Once we get the sheets, which we have now, we will look them over and announce the winners.
Now, one of the things Kailin did not want to do is send the challengers home without giving them some love so instead of just the grocery store she had them do a full body workout. This one hurt, and a lot. Now please note that if it were me I would have just done the grocery store however it wasn’t my call . The work out consisted of the following disciplines; Dumbbell Chest, Lat Pulldown, Squats, Military Press, Tri Cable and the winner was the person who lifted the most weight, combined, with all of the disciplines. Now they only had 2 minutes to do each station as many times as they could. The winner for the guys was Jon lifting 26,745 pounds total and for the women Tina 18,175 total pounds. Good job guys, keep it up.
Posted by Kevin Ellis at 6:28 AM No comments: