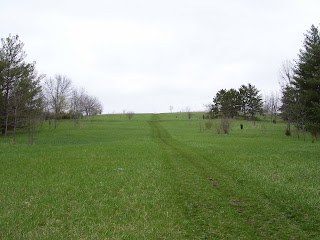 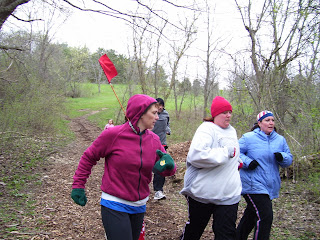 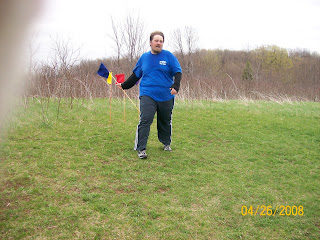 Well after such a good week Saturday was very cold but the challengers were up for the challenge. This week they went to Nature hill and the challenge was for them to run up the ski hill, pick up a flag and then run down the other side of the hill. Each team had three people on them. Every group had a trainer that went with them. The teams were as follows:
#1 Mike, Kathy and Doreen (Jim Meyer coach)
#2 Matthew, Tina, Donna (Sue McNutt coach)
#3 Craig, Nicole, Cindy (Dale McNutt coach)
#4 James, Sue, Vickie (Kailin coach)
The top of the hill was very windy and some of the challengers stated that the challenge got increasingly harder when they approached the top of the hill. They wanted to stop but they kept going and in the end reaped the benefit of their labor. The winning team was #4 with a time of 4:34.43. There was no quitting in all of the challengers especially team #4. Good Job to all.
Posted by Kevin Ellis at 1:03 PM