Is food the answer?

I was on my Facebook page the other day and there was a general message left from a friend. The message said, “Really tired most of the time. What can I do to get some energy?” I stayed silent for a few days but kept looking at the people who were posting. People were telling her that if she were to eat this certain food or take this certain supplement she would get the energy she needs. Some people said apples, some said veggies, some even went as far as to say more coffee. But none of them asked the question, “What does your exercise look like?”

Believe it or not, exercise, whereas if done really hard, can tire you out, also has the effect of giving you much more energy in the long run. Here is something that many don’t realize… Science has proven that the harder your heart pumps during a workout, at rest, the slower it will become. Also, exercise gives you the ability to handle much more of a daily stress load on your body. Medical science has proven that people who tend to exercise daily have a happier physical life and don’t suffer from illnesses as often.

In defense to my friends who really mean well, food is our fuel for life. We need it to stay alive, but I believe what most people need to do is not eat more but exercise the fuel we have stored in us. Our bodies need to become more efficient in the fuel we give it. I know my Facebook friend meant well, but in the end is more food really what she needs? Or is it exercise to lose the excess weight and put her into better shape? Think about it.

Posted by Kevin Ellis at 4:52 PM No comments:

Step Challenge...How are we different! 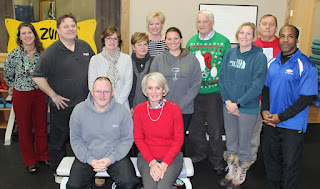 What a crazy world we live in. Could you have imagined just 20 years ago that we would have a device on us that could measure the amount of steps we take each day. Be able to tell us where we are by GPS and map our route and then measure our resting heart rate? What a world we live in.
Last year I started a Step Challenge at my gym, Parkers Place, because I really was tired of hearing people complain about gaining so much weight or not being able to lose the weight they had. I also started this challenge just to see how many steps the average person in my gym actually takes. Little did I know that after the first month, this challenge would take on its own life.

The Parker's Place Step challenge was not your usual 3 or 6 week challenge. This challenge measured how many steps you just don’t take on a day but also for the year. Actual steps were counted every day and tabulated on a white board. Now just counting steps, in it of itself is quit boring, however I asked myself a question… Where would those total steps put us if we were to really walk from our homes? Would we be still in Wisconsin? Would we make it to the west coast? Where would we be?

So, along with counting steps I also drew a map of the United States and started everyone from Oconomowoc Wisconsin and we started walking west. (Now we used 2100 steps as a mile which is just about the national average). The goal was to get to the Pacific Ocean. I also sweetened the pot a little by adding prizes at 250,000, 500,000, 1,000,000, and 2,000,000 steps. Boy, did this challenge take off. By the end of the first month I had several people who had passed the 500,000 mark and was quickly approaching the 1,000,000 mark. People were hitting the marks much quicker than I thought they would.

My hopes on putting this challenge together was to make people aware of how much we are not physically active and it worked. For those that finished the challenge, which ended at the end of November, they all told me that they were better off doing it because it got them thru the usual times when they would have experienced a low and lost focused. This challenge helped them keep focus.

Well we have started another challenge this year and this one finishes in San Francisco (market street). The prize points are higher 750k, 1.5mil, 3mil, and 5mil and we started January 1st instead of March 1st. This gives us two more months to get those goals achieved. Well, here we go. I will blog about our experiences later on in the year.

Visit us at http://www.parkersfitness.com/ for more info!

Posted by Kevin Ellis at 3:55 PM No comments:

The Beginning of the year

Well, here it is January 1st and you told yourself that you wanted get in much better shape this year. You have tried many things over the years and not one of them has really stayed with you and worked. You have tried thousands of diet plans and bought hundreds of pieces of equipment that you saw on infomercials. But this year you tell yourself that “THIS YEAR WILL BE DIFFERENT!!!!” Well, let me just state outright that the definition of insanity is doing the same thing over and over and expecting a different result. I guess that means that most of us our just plain insane.
In this blog I am going to give you some ideas on what you can do to finally turn that corner and get yourself in the shape you have always wanted. So let’s get started.
Step one:
Take a moment and think about what you really want to do. Do not go to a gym in an emotional state. That is like going to the grocery store hungry. You won’t make wise decisions. Once you have realistically thought about it then write your goals down. Most people I know don’t want to have movie star bodies, they just want to feel good in the body they have, so, be realistic.
Step two:
Once you have written your goals down. Put them to the side and wait a week and revisit them. If they still make good sense, then begin the process of pursuing them. Go to your local gym and ask questions about the place and most important the owners. Why the owners? Because you can tell a lot about a place by the who the owners are. Are they absentee owners? Do they do the personal training? What does the client base look like? Are there people there your age? Are they open 24/7? What type of neighborhood is the gym located in? Then finally look at the price. The average gym should cost you $35 per month for single membership and $70 per month for family. Remember, you get what you pay for. If you go cheap, you will get cheap. If you go expensive you should get top treatment. DO NOT LET THE 12 MONTH COMMITMENT SCARE YOU OFF. If you are serious about committing to your goals, 12 months should not be a deal breaker. Two year or three year commitments are not necessary and are just plain stupid. Don’t fall for them and don’t sign up for anything more than a 12 month commitment.
Step Three:
Once you have selected a gym, commit to three times a week to improve your health. You cannot do it once or twice a week; you are wasting your time and your money. You need a minimum of three times a week. If you need help, seek out a personal trainer that is your own age to help you. Why your own age? Because a 20 year old trainer has NO idea about the needs of a 50 year old even if you told them. They can be well educated but reality and book smarts are two different things. This is not to knock my young trainers, but the majority of them are only in it until they can find something else they can do to make MONEY. When you find a trainer who is older, the majority of them are in it for the long haul and have the knowledge to help you achieve your goals. Most important though, their staying ability is far greater than a 20 year old.
Finally, do not select a gym just because your friends are there. Socializing while working out just doesn’t work and you will not achieve much. Remember why you are seeking out a place to work out. If it is for social reasons, then don’t purchase a gym membership, take your friends out and spend that same money on having fun. (Sorry, told you I was going to get real about this). More on this in a later blog. My next blog will be on dieting after the holidays. Should we do it?