So many people have asked me over the past few years about running shoes and I have told everyone of them that it really doesn’t matter what type of running shoe you get, but what matters is that they invest in a good pair of orthotics. I have told so many of them that all they need to do is go to the local bargain store and buy a reasonably cost effective pair of shoes but invest in a good pair of orthotics.

However, every person that I have told that to has never taken my advice seriously. In the end they would go to some specialty store and spend hundreds of dollars on shoes thinking that they have the “right” pair for them. I remember when Air Jordan’s came out and every basketball kid in America just knew that if they got those shoes they would play like him. Since that time every good basketball player has their brand name shoe and we spend hundreds of dollars just to be like “Mike”.

Over the past several years I have seen shoe commercials come out talking about their latest and greatest find and how much research has come out to support their newest findings. Recently a shoe that looks like a rocker has come out and a friend told me that every time she goes walking this shoe helps strengthen her legs because of the design of the sole of the shoe. It could never have anything to do with the fact that she is walking now when she wasn’t before? But I could be wrong. Just for giggles I found myself in one of those specialty stores just to find out what was the latest and greatest thing on the market. I was met at the door and greeted like I was a king and as an ex-sales person, for you to be able to make any inroads with anyone you need to treat them like royalty. Moments later they had me up on a treadmill and they were looking at my running style. They told me that by looking at that, they could get me the right shoe for my foot.

Well they had me running at 5.0 with no incline and they took film of my running ability. No one asked me if I was a long distance runner or a sprinter. I personally don’t think they cared. I think they just wanted to sell shoes and the more “information” they could get from me would make them seem smarter and I would just rely on them and buy whatever they suggested. Before I knew it they were having me try on these $200 shoes telling me that this is what I had to wear to correct my foot issues. I let them go thru their sales pitch as they told me that I would probably lose about 2 minutes off my 5k mile time which I thought was really funny being that they never asked me how fast I’ve run it in and I am a sprinter not a distance runner what do I care about running 3.1 miles. Give me 100 meters any day. But I listened not asking any questions until the end. My only question was if they thought that I should get orthotics and their response was that I could but did not need it with those $200 shoes.

I took the shoes off my feet and looked inside them and felt around to see if there was any arch support in them… there was none. When I asked about that they said that the arch support was on the side of the shoe and the shoe would be good for about 300 miles of running. I graciously thanked them for the information, handed them back the shoe and left. Then I went to the local bargain store and bought the same shoe for much much less and invested in a good pair of orthotics. Instead of me spending $200 I ended up spending $40 plus the orthotics of $35 my total was $75. Now since that time (6 months ago) I have bought one other pair of shoes but I still have the same orthotics. I will spend no more than $40 for any pair of sneakers and I truly believe no one has to spend any more than that… but that is my opinion and I could be wrong.

This morning I was watching television and there was a report on Reebok and their “Easytone” sneakers. I am not making this up, these shoes are suppose to reshape your glutes and strengthen your legs and how they do it is by these bubbles they have on the bottom of the shoes. From the beginning many people have been skeptical about this new shoe so there were two independent studies done and one of those places that did a study on the shoe was University of Wisconsin Lacrosse and what they found out is that there was no difference from wearing those shoes or not wearing them. It has been found according to this report that Reeboks advertising was misleading and deceptive. No really! It couldn’t be because they are using 20 something year old models who have never been pregnant and probably work out their whole life. Or that 20 something year old guy how just finished playing some sport at some university? Hey, let’s use that 40 something women who had 3 kids or that average man who is in his 40’s. No, that wouldn’t sell! Now it has been found that there has been deception going on. Hello!

In a nut shell, there is not one shoe out there now on the market that has good arch support nor are really good for your feet. You won’t find it. They have taken the arch supports out to save money. Whether it maximizes profits or not I don’t know, all I just know is that they have taken them out. (Remember Sam Goody and their shoes? Oh now that was a good pair of sturdy, foot pleasing shoes.) However, I am going to try and help you all who read this blog out… If you want good pair of running or walking shoes and your feet are hurting, don’t go out and spend $100 dollars on a pair of sneakers. Don’t do it! Invest in a good pair of orthotics to support your arches then go out and buy a pair of sneakers within your budget. They problem are the arches for most people and orthotics will definitely take care of that.

Now I could get really scientific and explain to you why your arch is so important and how with a weak arch you will displace your right foot strike and compromise your walking and running gate, but I won’t just know go out and buy so flexible orthotics and enjoy walking again.
Posted by Kevin Ellis at 11:45 AM No comments: 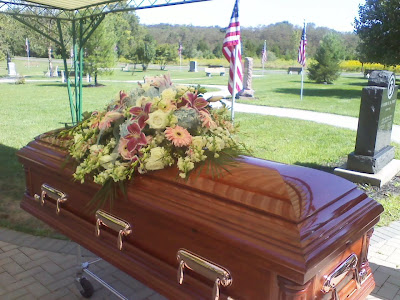 Over the last few months I have not been myself and I know that some people have suffered because of it. Just last week, as many of you knew, I buried my mother after a long bout with cancer. Some of you have read my first book and if you recall I mentioned that back in august of 2009 she started the fight of her life and little did in know what affect it would have on me, my family and my community here in Wisconsin and your patience has really made me appreciated even more how blessed I am to know you all.

A special thanks goes out to my Parkers Place members who really stepped up to the plate and took over the business while I was gone. Once again you blessed me with how you took control and took care of “your” gym. I even heard that we have a few new members that have joined while I was gone, wow!

Special thanks goes out for all those that braved the weather and came out to the viewing and funeral. It was good to see you all especially those I haven’t seen for a long time. Thank you also for all the prayers that went out on behalf of my family. I truly believe that God heard you and now my mother is comforted in heaven and my father’s rehabilitation is going quicker than even the doctors thought. Please continue to pray for a quick recovery for my father.

Thank you Spring Creek Church for you many cards and prayers. I believe they were heard and felt by my whole family and because of your prayers even in the midst of a hurricane, an earth quake and power outages my mother’s final burial time was peaceful and will never be forgotten.

Well the story is not over yet. My wife is still fighting the good fight and my prayer is that she concurs her fight against cancer. The future is uncertain, however I know one thing… I have a support network that even in my most lowest point will help me thru anything I may go thru. With that I can rest my head on my pillow at night and sleep well. Thank you all for you help and support.